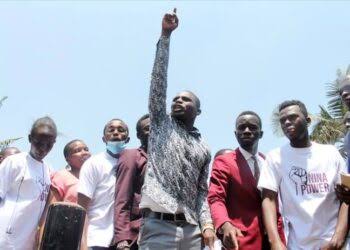 University of Nairobi student leaders have asked first-year students meant to report today on Monday 20th September to give the admission process a wide berth.

The students have expressed their dissatisfaction with the recent move by the administration to increase both school fees and accommodation fees.

Speaking during a press conference on Friday, University of Nairobi Students Association secretary general Nathan Kikwai said it was time to act since the administration has been ignoring their grievances.

“As UNSA spokesperson I want to tell all parents to stay at home or if they are coming they come and join the demonstration,” Kikwai said.

He further asked the administration to use the Sh58,000 paid by first-years for two academic years and not a semester.

“I also want to tell first-years not to sign any binding agreement in the forms that were sent so that we can engage with the administration after ensuring there’s no enrolment going on,” Kikwai added.

He faulted the administration for making education unaffordable by increasing fees.

“Comrades, to remain competitive in the global market we need an informed labour force, one that is fully equipped with the modern technological advancements,” Reagan said.

The student leaders further threatened to disrupt the 65th graduation that is set to take place on September 24th  Friday.

The students have planned to stage a demonstration daily, starting Monday until the administration listens to their grievances.

Students reporting for the September intake were slapped with increased accommodation fees.

Those who previously paid about Sh2,700 per semester for accommodation will now part with almost Sh18,690.

The hostels were charged at Sh30, Sh28, and Sh26 per day for a whole semester.

The revised fees structure directs students to pay Sh175 daily for a single room and Sh144 for a room shared by two.

Tuition fees for commerce, economics, and law students four year programmes have been increased by up to 70 per cent to about Sh1 million.