The Kenya National Union of Teachers (Knut) secretary general Collins Oyuu, has called for review of the salary deal signed last year which was without monetary benefit.

Oyuu said Knut has already initiated discussions with the employer Teachers Service Commission (TSC) over the possibilities of renegotiating 2021-2025 CBA.

“..to have a salary hike component included. We have and continue to push for this because we appreciate the fact that the reasons we did not have a salary rise in this particular CBA was that the economy was performing poorly due to the effects of the Covid-19,” said Oyuu.

“Treasury has already appropriated funds to boost the TSC kitty for the same purpose. We are determined to have ourselves, the employer and any other necessary stakeholder to expedite the discussion,” said Oyuu.

Though the CBA lacked immediate changes to salaries of teachers, TSC said it was not the end of the talks as they will plan for another talk on the issue in less than twelve months that could review the signed deal. 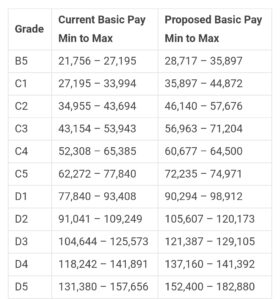 Oyuu also want the TSC to shoulder the cost of training teachers.

In its demands, Knut argues that even though continuous pieces of training in any profession sharpen the skills of workers and place them in an advantaged position, the cost must be shouldered by the employer.

Further, the union also wants the age group to attend the pieces of training to be reviewed.

Oyuu termed the period of completing the entire training of 30 years as quite long, adding that this might not make any meaning to teachers who are 55 years and above.

Teachers are expected to part with Sh6,000 per chapter every year. Each teacher is expected to take six modules, and each module is taken after five years. And one module is organised in yearly chapters.

Misori said the economy was improving hence the need for the TSC to reopen talks on salaries review.

“Important among these outcomes was the freeze in salary reviews during the Third Public Sector Remuneration and Benefits Review Cycle (covering 2021-2025 fiscal years), which the government blamed on poor economic performance occasioned by the pandemic,” said Misori.

He said Kuppet rejected the rationale of the freeze, seeing it as a convenient cover for the government to walk back on its commitment to teachers.

“We were forced to sign a non-monetary CBA in order to safeguard previous gains and maintain the collective bargaining framework,” said Misori.

He noted that the union has been lenient and reasonable but the time to push for new terms could not wait for another year.

“Enough is enough, we have been lenient and reasonable enough. However, we expect TSC to respect our views and initiate the talks,” Misori added.

Misori said the freeze in reviewing salaries was pegged on poor economic performance relating to the virus.

“We want to make it very clear; teachers are not beggars, they are professionals. They know when to talk and what to say. We know this is the right time to engage in such a matter without the interference of school calendars,” he added.

Sources say the government is planning to review upward the salaries of teachers, just one month to

review upward the salaries of teachers, just one month to general elections.

“This is to appease teachers who are unhappy and that the government would want to do something about it on an election year,” said a member of the National Assembly Education Committee