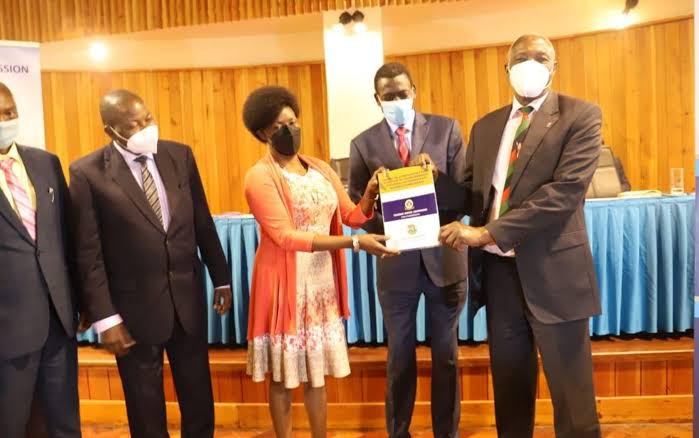 From the 4th of April, its official teachers will participate in a 5-day online TPD training.

The training will be conducted online from April 4th to April 8th, 2022.

Mount Kenya, Kenyatta, and Riara universities, as well as the Kenya Education Management Institute (KEMI), have been selected to provide training by the Teachers Service Commission (TSC).

The four universities appear to be ready and willing to provide the training in April, according to the details.

The training was originally scheduled to take place in person during the April session, but the institutions have announced that it will instead be delivered electronically.

Mount Kenya University stated it will conduct pre-training exercises for its TPD teacher trainees in a mass SMS sent out yesterday.

Subscribers were also encouraged to register for the TPD introduction lesson so that they could begin using the online content.

For convenience of learning, it advised teachers to download Microsoft Teams from the Play Store.

This recent disclosure comes as a shock to hundreds of teachers who believed the initiative had been halted following a Parliamentary order.

The lawmakers had demanded that the TPD courses be halted immediately until sufficient stakeholder discussions were conducted.

The Mps also want the government to pay the Sh6,000 training fees and increase the list of schools that offer refresher courses.

The National Assembly Education Committee wants the training to be discontinued to avoid teachers from suffering, according to a report presented to the House on March 3.

Despite the fact that teachers are directly affected by the TPD policy, the National Assembly Education Committee claims that TSC did not include teachers in the preparation of the policy framework for the TPD and its subsequent roll-out, which is in violation of Article 232(1)(d) of the Constitution, which requires people to be involved in the policy-making process.

The TSC has not made the factors employed in arriving at the exorbitant cost per module of the program public to teachers in this country or other stakeholders in the education sector, according to the statement.

Each module of the TPD costs Sh6,000, which must be paid by teachers.

This means that in an entire teaching career, each teacher will be required to take five modules within 30 years, translating to fees of about Sh180,000.

The Mps also want the TPD modules to be integrated with the ongoing Competency Based Curriculum (CBC) training to avoid wastage of resources and time.

“To achieve a well-coordinated and holistic approach, the Teacher Professional Development Programme ought to have been integrated in the ongoing capacity strengthening programmes for teachers on Competency Based Curriculum so as to avoid duplication of Government effort, waste of public resources and subjecting teachers to bearing the burden of a mandatory programme,” read the report.

They recommended the Ministry of Education to take over implementation of the TPD Programme for teachers in public institutions.

The Committee said, the decision by the Commission to manage teachers’ professional development and regulate the teaching profession is a departure from the established practice where professions have self-regulatory mechanisms and bodies that are distinct from employers.

They said teachers are underpaid and most of them have stagnated in one job group for long without promotion.

In addition, the Mps said, teachers got nothing after signing of non-monetary Collective Bargaining Agreement (CBA) 2021-2025 and so will not be possible for them to shoulder the cost of training.

The report follows a petition tabled on October 5, 2021, by Emuhaya MP Omboko Milemba on behalf of representatives of Kenya Union of Post Primary Education Teachers (Kuppet).

In the petition, Milemba raised issues on cost of the programme, selection of institutions to offer the course and whether public participation was done before roll-out.

Kuppet and the Kenya National Union of Teachers (Knut) have argued that even though continuous training sharpens skills, the cost should be carried by the employer.

Proposing suspension of the programme, MPs said: “That the TSC should conduct extensive public participation as required and take to account the views of teachers, trade unions and other stakeholders with a view of building consensus on the programme.”

The Commission CEO Dr. Nancy Macharia said only teachers taking the training will be issued with a teaching certificate.

The certificate will be renewable after every five years and only after successfully taking the modules.

KNEC:How To Check 2021 KCPE Results Online and Via Sms