The Following Categories of Teachers Favored Most In TSC, Knut Pay Talk

Salary talks between the Teachers Service Commission (TSC) and Kenya National Union of Teachers (Knut) have resumed, with the union reportedly pushing for a basic salary increment of between 15 to 20 per cent.

The union is said to be concerned with classroom teachers outcry who want the huge salary gap between them and school administrators be addressed.

Knut has expressed confidence that the non-monetary collective bargaining agreement (CBA) it signed with TSC in July last year will be reviewed soon.

Knut Secretary-General Collins Oyuu, revealed that the union had held five meetings with TSC to address the issue, with the sixth one planned to take place in a few days.

On Tuesday, Knut’s National Steering Committee will hold a meeting in Nairobi to fine-tune the proposals to be tabled in the planned meeting with TSC.

Though Mr Oyuu declined to discuss the details of the proposal, multiple sources have indicated that the union was ready to take any counter proposal from the commission, so as to pacify its members who felt cheated by the “empty’ CBA signed last year.

“I want to announce to teachers that the negotiations that were stopped on the salary increment under the watch of the former union leadership have now been re-opened,” said Mr Oyuu.

He added: “I am engaging TSC properly to have the CBA that was signed reviewed, especially in relation to the salary component … I can assure you that we shall succeed,” said Mr Oyuu.

The union will also be pushing for the promotion of deputy head teachers in learning institutions across the country.

“We are pushing for the appointment of deputy head teachers in schools as majority of the learning institutions do not have the administrators who play a leading role in daily operations and discipline among students,” said Mr Oyuu.

Mr Oyuu’s team has been accused by teachers of hurriedly signing the CBA with TSC last year to legitimise its existence amid dwindling membership and financial resources.

Knut currently has a membership of approximately 18,000 members.

Though the CBA lacked immediate changes to salaries of teachers, TSC said it was not the end of the talks as they will plan for another talk on the issue in less than twelve months that could review the signed deal. 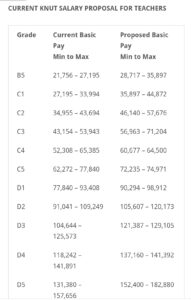 From the negotiations, the union only came out with an enhanced maternity leave, which was increased from 90 to 120 days, and paternity leave was pushed from 14 to 21 days.

In the CBA, Knut ceded secondary school and tertiary institution members to its rival, the Kenya Union of Post Primary Education Teachers (Kuppet).

TSC Chief Executive Nancy Macharia has also been accused of arm-twisting the trade unions to sign a skewed CBA to the detriment of the teachers in public schools.

Mr Oyuu said the current Knut leadership will work closely with the various government agencies in a bid to ensure that the needs of the teachers are addressed.

“It is not possible to successfully fight the government of the day when you want serious issues relating to the welfare of the members (teachers) to be sorted out.

“We embrace alternative dispute resolution avenues in place of strikes that were often deployed by past union leadership,” said Mr Oyuu.

As a result of the perennial fights with TSC, Knut members were left out of salary increment and promotions effected by the commission, especially in the last five years.

During the tenure of Mr Wilson Sossion as secretary-general, the union’s membership reduced from 187,000 to 15,000 due to a long-running spat with TSC and the Ministry of Education fuelled by a litany of legal battles in the industrial court.

It also saw the union’s earnings sharply drop from more than Sh147 million per month to Sh12,000 by the time he bowed out of the union leadership.

Mr Oyuu said his style of leadership is diplomacy.

“Some people asked me whether I would fit into his (Sossion’s) shoes when we took over the leadership mantle last year. I kept asking which shoes, because I have my own shoes that fit me well,” said Mr Oyuu.

But Mr Sossion said at the weekend in Kericho that the current perks enjoyed by the teachers were as a result of his fight to have salaries increased and the working environment improved.

“We have the support of all former national officials in the ongoing reforms that we are initiating to turn around the union and attract more members. But Mr Sossion remains the only one who, despite having left the union in our able hands, continues seeking to rock it for his selfish gains,” said Mr Oyuu.

TSC boss Nancy Macharia was unavailable for a comment on the negotiations last evening.

But a commissioner who declined to be named saying he is not the official spokesperson confirmed the union had engaged TSC on the matter.

It is true, the talks have been on between the commission and Knut, but I am not at liberty to discuss the details as that falls on the desk of the CEO,” said the commissioner.

Sources say the government is planning to review upward the salaries of teachers, just one month to general elections.

“This is to appease teachers who are unhappy and that the government would want to do something about it on an election year,” said a member of the National Assembly Education Committee.