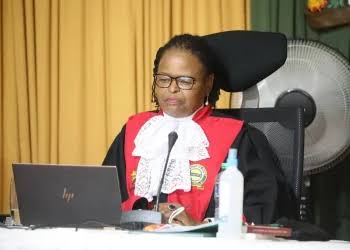 The supreme Court has released the time in which the final judgement on presidential results  will be issued.

In a notice sent to newsrooms  the Judiciary stated that the judgement on the presidential petition hearing will be issued by the team led by Chief Justice Martha Koome at 12pm on Monday,

The seven-judge bench is expected to make their own judgements and read them out at the Supreme Court.

Koome on Friday formally adjourned the presidential petition hearing ahead of today’s judgment.

Judges used the entire weekend to write their judgment on the nine issues canvased before court the past three days in the petition that seeks to overturn the election of Deputy President William Ruto as President-elect.

The above issues formed a huge portion of arguments by dozens of lawyers who represented Raila Odinga,  Ruto, IEBC, the commission chairperson Wafula Chebukati and other interested parties. 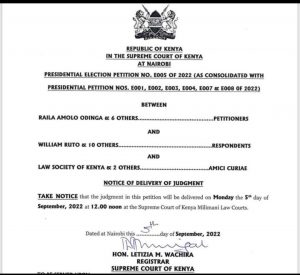 Four orders the Supreme Court may issue regarding a presidential election petition.