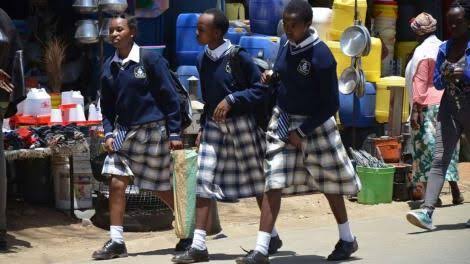 After burning dormitories, holding teachers at ransom, going on strike and drinking themselves to a stupor on their way from school, the high schoolers are now home for the short Christmas holiday, and parents have to put up with the nightmare of their unruly behaviour.

The second term of the 2021 school calendar was characterised by gross indiscipline among learners that left stakeholders in the education sector worried and cast a spotlight on the quality of parenting.

As the number of fire incidents and strikes increased during the term, school principals reported having to deal with demands by learners who wanted to dictate the school calendar or routine, diet and and even when or whether to sit examinations.

Education Cabinet Secretary Prof George Magoha has attributed the indiscipline that has rocked schools and caused extensive damage to property to poor parenting. Parents have been made to bear the burden of rebuilding and replacing school infrastructure destroyed by their children.

“Whether we like it or not, one of the signs that this nation is becoming like or is already like Sodom and Gomorrah is the way some parents are treating their children like an egg that must be cleaned and put under a chicken to warm up,” said Prof Magoha on Friday during the 17th graduation ceremony at Kabarak University in Nakuru County.

“This kind of parenting is extremely wrong and dangerous because children cannot grow with acceptable morals and what we are bringing up are grown up babies in our schools. With this kind of upbringing, we should not expect our teachers to teach them,” the CS said.

The Education CS has recently attracted both ire and plaudits for calling for the reintroduction of caning, which is outlawed by the Children’s Act.

Many parents, however, readily admit that they have lost control of their children as more than 50 schools have reported arson fires that have in almost all cases precipitated closure of the learning institutions.

“Many of the discipline cases have been linked to drug abuse. Some children are known to abuse drugs and it becomes a concern for us during the festive season when even adults over-indulge,” said Mike Muriithi, a parent from Nairobi, adding that equally challenging is how to monitor internet usage by their adolescent and teenage children.

“The extent of anarchy in schools worries us too. There appears to be a disconnect between the systems in place at home and at school,” Ms Vera Nzioki said. She admits some parents have failed in their parenting duties, which has an influence on other children.

The cases of indiscipline are reported to have worsened after learners spent ten months away from school last year, when the Covid-19 pandemic disrupted the school calendar.

According to official data, more than 250,000 learners did not resume school when they reopened. Many of them were involved in drug and substance abuse, while others became pregnant or got married.

Teachers have complained that the negative influence has not been easy to reverse.

The principal of The Kenya High School, Flora Mulatya, advises parents to take advantage of the break to spend more time with their children and guide them appropriately.

Schools are scheduled to reopen on January 3 2022 for beginning of the third term that ends in March.

“It’s good that the children are closing when most parents have also taken a break from work apart from a few professions. Give them time to rest but they should also not forget about books. They should avoid company that might mislead them,” Flora said.

Ms Mulatya added that parents should be aware of the company their children keep, to avoid being misled. She said visiting friends can influence adolescents and teenagers negatively, as they tend to compare themselves with others.

Parents should teach their children how to be responsible while using the internet, she said, acknowledging that many homes have access to the internet and smart phones.

“They should use it for positive gain. Build trust in them and don’t police-mark because if you do, they close-up,” she said.

Father Edwin Hunja, the Catholic Archdiocese of Nairobi youth chaplain who doubles as a priest at St Paul’s University of Nairobi chapel, says the learners are already in a holiday mood and they should be allowed to relax.

“Allow them to celebrate but keep an eye on them. They should come to church and for families that hold prayer sessions at home, the youth must be present,” Fr Hunja said.