Learning was temporarily paralysed at God Bondo Secondary in Rangwe on Monday morning after parents stormed the school to demand the transfer of the Principal Tom Mboya.

Security officers from the Ngegu Police Station had to be called in to control the angry parents, who had vowed to camp at the school until their demand was met.

Mr Mboya is also accused of having a poor relationship with his colleagues.

Some of these issues led to students being transferred to neighbouring schools like Olare, Ongeti and Kuoyo Kochia.

God Bondo has 18 students, with no learner in Form One, with the parents claiming it had over 300 learners seven years ago.

According to the school register, 16 students reported to class on Monday.

Two were absent, with one female student reported to be sick and admitted at a private hospital at Nyangweso trading centre.

Seven students are in Form Four and will sit this year’s Kenya Certificate of Secondary Education exams at a different centre as  God Bondo does not meet the threshold of 15 candidates set by the Kenya National Examinations Council.

Form Three has seven students, while Form Two has four.

The school has five teachers employed by the Teachers Service Commission (TSC), with another hired by the board of management.

They claimed their salaries had been delayed for seven months.

Some parents told journalists that they were worried that the school would collapse if all students were withdrawn.

Mr Vitalis Oketch said stakeholders have presented memoranda to different government institutions, demanding the transfer of the principal but their request had not been honoured.

Students have been scoring Es when neighbouring schools are having A grades,” he claimed.

Mr Oketch said students from neighbouring areas must walk several kilometres in search of education at schools that perform better.

“Poor performance has led to our community not having professionals. Most students from the school have ended up becoming housewives and boda boda riders,”

“Our community will not have doctors and engineers like other areas,” Mr Oketch claimed.

But the principal defended himself against the accusations, instead accusing some of the parents of incitement.

Mr Mboya said he joined the school in 2014, when there was only one building, but out of his good relationship with the National Government Constituency Development Fund, God Bondo now has four new buildings.

He accused the students of not doing enough to excel in the exams.

He said some students reported to the school in Form One with marks as low as 100 in KCPE.

“Over the years, Form One admission has reduced. We have never admitted more than 24. I reported to the school when the population was 74,” he said.

Mr Mboya added that more information about the challenges facing the school had been presented to the Ministry of Education and TSC, which will act accordingly.

But education officials who visited the school said the government would act on the grievances expressed by the parents.

Rangwe quality assurance officer Fredrick Nyauncho said he would write a report about the parents’ demands and forward them to the Ministry of Education.

He received a memorandum from parents, who listed some of the issues they wanted to be addressed. 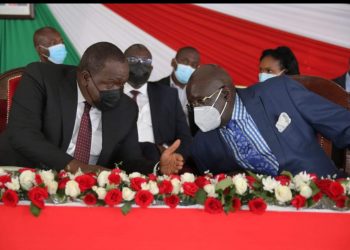