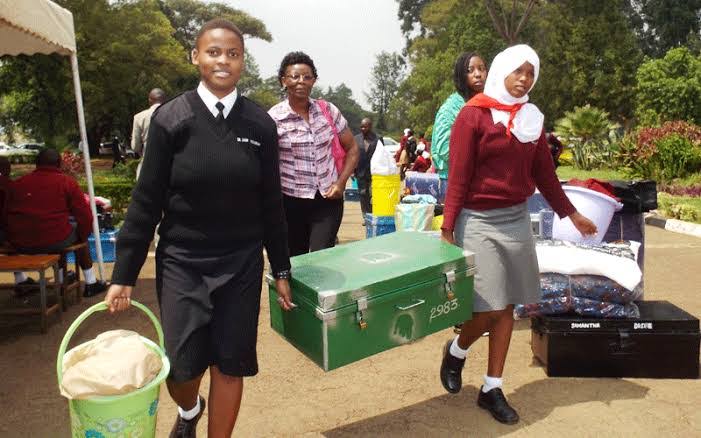 Prof George Magoha, the Education Cabinet Secretary, has urged headteachers against making unreasonable demands on Form One students ahead of their admission on Tuesday, May 3.

When announcing the placement of form one pupils, Magoha issued a strong warning to school heads, accusing them of denying eligible children admittance due to unapproved goods by the ministry.

Exercise books, novels, class readers or set books, mathematics sets, atlases, copier papers, and fulscarps are among the items on the list.

Furthermore, the Education Secretary prohibited schools from requiring students to report with non-academic equipment such as hockey sticks, machetes (pangas), or hoes (jembes).

The fiery orator The move, according to CS, was made in accordance with the government’s mandate to make basic education accessible to all. He promised to keep parents from becoming overburdened by unneeded costs.
“We are committed to ensure that parents of Form One students are not overloaded with extraneous procedures that drive up school costs. The goal is to enroll a Kenyan child in a public secondary school that is free of charge “According to him,

Magoha stated that President Uhuru’s government had set aside money to fund education in public schools and that it would meet the expenses for the classroom tools. He further warned that any headteacher who will be caught turning away students because of the items would face the law.

“Principals should therefore exercise precaution when listing requirements as part of the measures to the cost of education. Do not stop the child from going to the school, if you do, I am still the head of this ministry, I will come for you,” Magoha warned.

Magoha noted that 9,000 students will receive financial assistance under the Elimu scholarship programme. 4,000 of the scholarships will be dedicated to informal settlements in urban centres.

“President Uhuru Kenyatta, having that there was a huge problem in urban slums, 4,000 of the scholarships will be for the less fortunate students in these areas. The other 5,000 will be distributed across the country,” the CS added.

He further emphasized that students in boarding schools will be given priority in the awarding of bursaries.

“Bursaries and scholarships should be given to students admitted to boarding schools since day schooling is free. However, for boarding school well-wishers and philanthropists are encouraged to consider covering costs of other non-tuition related expenses such as school uniforms and personal effects for children who are needy,” he explained.