Chingondi primary school in Bomet central is empty, with no business being transacted, at a time when many schools throughout the country are buzzing with activity following the release of the 2021 KCPE exam results.

The compound is isolated, and the deafening silence is a strong indication that something is wrong.

The security guy is nowhere to be seen, and the tiny iron-sheet gate has been left open.

Parents of candidates who took the exam here are shocked, and have been flocking here since Monday to get their children’s results.

This modest school, tucked away in a rural corner of Silibwet Township, is the topic of conversation for everyone in the community.

Residents who had earlier organized a rally are shying away from the cameras and speaking in hushed tones.

No one here is brave enough to reveal the grades their children received.

They demanded the immediate transfer of the school’s principal, whom they claimed was to blame for the school’s bad performance streak.

Agitated education officials were forced to visit the institution in an attempt to calm the brewing animosity between the school administration and the locals.

Residents who arrived at the school as early as 9 a.m. on Wednesday morning protested what they claimed was a trend of poor results with no attempts by the ministry to correct it.

In this year’s results, the top candidate received 137 out of 500 points, while the lowest received 44.

Below are the results 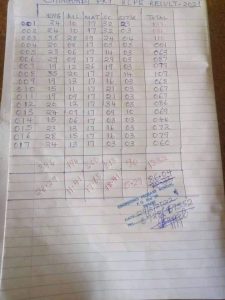 Candidates had nearly identical marks in each of the subjects, according to a copy of the results in our hands, which raises more doubts.

“We don’t understand why this school has been performing poorly every year,” one parent said. “The headteacher and his deputy should be transferred and new people brought in to run the school.”

Another parent expressed her sadness at having provided everything necessary for their children to succeed only to obtain terrible consequences.

Officials from the Department of Education have promised that all of our children will receive letters of admission to high schools, but what will you do with such grades?” She went on to say that there was a lack of discipline among the students.

Central sub-county of Bomet Walter Sang declined to comment on the situation, claiming that he had not yet briefed his bosses.

“For the time being, we will not speak to you until we have briefed our seniors…in reality, the results have not been verified,” he explained.