Thirty-seven KCPE candidates from Emmanuel Springs Academy in Makueni county’s Wote sub-county got an A in Mathematics.

What’s astonishing, however, is that they all got the same grade, 85%.

Some teachers and parents are scratching their heads, unsure if this is indeed conceivable.

“How is this even possible? What exactly happened?” Linet, one of the teachers, questioned how all students could receive the same grade.

Below are the results 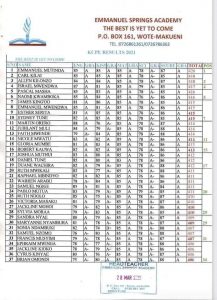 Emmanuel Mutinda, who received 420 points in the KCPE 2021 tests, is the school’s top candidate.

Carl Kilai and Allen Kilonzo, who both scored 418, are close behind him.

Mr Patrick Mbatha, on the other hand, believes that this circumstance is attributable in part to Knec’s standardization efforts.

Academic giants in Kitui, Machakos, and Makueni counties restored their dominance of the KCPE performance tables in the 2021 exam results, which had been threatened by little-known institutions.

Emmanuel Springs Academy is one of them, and it has had outstanding outcomes over the years.

Mr Patrick Mutua, the head teacher, said, “We have created the finest student in the county, Mweke Emmanuel Mutinda, who scored 420 marks.”

Mr Mutua’s school defeated well-known academic heavyweights in the county, including Kari Mwailu Primary School, which delivered the best KCPE pupil nationally in the 2020 exam, according to the findings.

Musyoka Kings Kelvin of AIC Kathonzweni Primary School was one of the top 10 performers with special needs.

According to the findings reviewed by the Nation, Tusunini Primary School produced five pupils who scored higher than 400.

Willis Kasivu Musau of Lukenya Academy received 418 points, placing him among the county’s top students. Thirteen kids from Muumandu Hills Academy, which has a strong track record, got 400 or above. The best candidate received 414 points.

Teachers, on the other hand, dismissed the regional academic giants’ poor performance, claiming that it mirrored the exam’s general performance nationally.

“Last year’s top student received 433 points. This year, the score has slipped to 428. We anticipate that the lowered performance will be reflected in all of the outcomes. It explains why our grades have dropped,” a Kari Mwailu instructor explained.

KCPE 2021 :Best performed & Most Improved schools in kenya in each Region