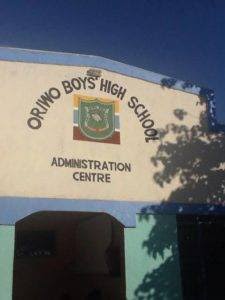 Yesterday evening, the neighborhood surrounding the Oriwo boy’s secondary school in the Rachuonyo North sub county of Homabay county was filled with jubilation and joy.

This came to light after their extra exemplary KCSE results, which had been withheld because the school was suspected of exam malpractice, were finally made public after being withheld. The Kenya National Examination Council, also known as KNEC, requested thirty days’ worth of time to investigate the allegations before coming to a conclusion regarding the Oriwo boys high school examination results that were withheld.

During the 2021 Kenya Certificate of Secondary Education examinations that were held in March 2022, a number of teachers from the area were arrested for exam malpractice, and according to some sources, some of those teachers worked at the massive school located in Homabay county.

However, following the completion of the investigation, the Oriwo boys were exonerated and given their results. Despite this, the performance is worse than their alleged initial mean score of 11.5

Oriwo managed to achieve a mean score of 8.215 out of a possible 10 based on the results that the school obtained yesterday, with grade distributions being displayed below.

The recent action taken by KNEC has rescued 548 applicants, of which 521 were granted admission to the university without any additional testing.

“I had no doubt that we were blameless. It is not possible for a school of our status to engage in exam malpractice. We have been performing well in all of the national examinations, and I have no reason to believe that this one will be any different.

Even though the entire country had branded us as thieves, the affected candidates were patient with us and believed in us, and for that, we would like to extend our sincere gratitude,” said one of the senior administrators in the school who chose to remain anonymous. “We would also like to thank our parents, stakeholders, and most importantly, the affected candidates.”