Its a sigh of relief to Job seekers in Kenya after legislators passed a bill against requirement that all job applicants must produce clearance certificates when looking for employment.

In a statement dated Wednesday, 10th November 2021 , Nominated MP Gideon Keter ,the sponsor of the bill noted that the MPs passed the bill without any objections.

“Earlier today, Members of Parliament unanimously supported the Employment Amendment Bill without any objections as the debate concluded. Previously as you may recall, before the introduction of this amendment, job seekers were tasked with the responsibility of running background checks on themselves so as to secure a mere job interview.” Said Keter

“However, now a cure has come through this amendment whereby an employer shall no longer perceive job seekers as a wrongdoer before they apply for a job. The solution to all these bottlenecks is that an employer will no longer ask job seekers for such documents until or unless an offer of employment is guaranteed,” he stated.

To support his case,Hon Keter noted that some states in the U.S mandated employers to shoulder the burden of verifying their new recruits’ histories.

“Job seeking should not be an adventure where job seekers must prove that they are not a wrongdoer or haven’t engaged in any crime in the past.”

“These are young men and women who are more than ready to offer their skills and knowledge for the advancement of this nation’s greatness,” he added.

The clearance certificates which include: that of good conduct acquired from the DCI, another from the Ethics and Corruption Commission (EACC), one from Kenya Revenue Authority (KRA), another from Higher Loans Board (HELB) and a Credit Reference Bureau (CRB) clearance would cost job applicants as much as Ksh 6,000

Its notable that the state makes a whooping Ksh750 million yearly from job seekers according to a report from the Parliamentary Budget office .

“Public-funded institutions should never be cash cows. From the research done by the Parliamentary Budget Office, these institutions have been collecting over Sh750 million every year from job seekers.” He noted

Below is the detailed circular 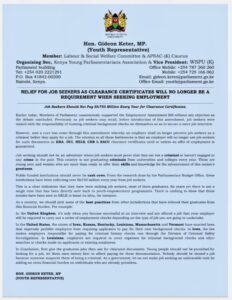 SRC launches Review Of Allowances Of All Public Civil Servants