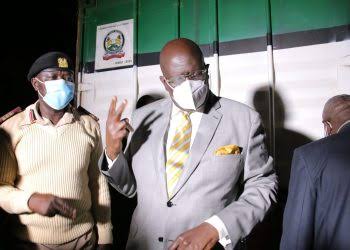 In a press statement , Magoha issued directives to be implemented by exam centre managers including one requiring for school gates in exam centers to remain wide open to allow ease of monitoring of all processes in the schools.

Magoha further instructed police officers charged with manning exam storage rooms not to leave their stations at any given point. They should remain vigilant until the final paper of the day is issued to the candidates.

“Security officers must sit at positions where they have a full view of the examination materials for the second daily paper as the morning paper is underway,” the statement read in part.

The Education CS directed that supervisors and invigilators must not take any time off from the examination rooms for any other activity while examinations are in progress.

Furthermore, teachers who will not be invigilating or supervising the exam sat on a particular day will not be allowed within the vicinity of the institution’s compound. However, teachers involved in the preparation of practical exams are exempted from this rule.

“Centre managers must not allow any unauthorised teacher or staff to hang around the precincts of the school compounds during the examination season. Only teachers handling practical subjects will be allowed in examination centres during the days the subjects are taken,” Magoha instructed.

Mobile phones remain prohibited in the examination centres save for that being used by the centre manager and the security officer. They will be kept at the former’s office and should only be used in case of an emergency.

The straight-talking CS admitted to early exposure of the exam but denied claims that the national test had leaked. He noted that officers from the Directorate of Criminal Investigations (DCI) had intercepted a cheating syndicate.

“A few scrupulous people have devised a new dirty trick of opening examination packages a few minutes before the start time, in what we call the  “early exposure”.

“A combined team of DCI investigators and Ministry of Education officials has exposed this racket and have arrested masterminds of the early exposure schemes. I repeat: No examination paper has been leaked, none will,” he added.

This morning, the DCI nabbed university students who were part of the syndicate. In an elaborate scheme, the perpetrators were accused of taking photos of the exam papers before sharing them with individuals to tackle the questions.

The hired individuals would then provide answers to the questions and share them with the exam supervisors.